Coming to Princeton, my biggest concern was definitely with the academic rigor of the courses. I had this perception that professors made classes extremely difficult and was worried about not being able to handle them. I took both Calculus I and Calculus II in high school, but because of this perception that I had, I reflected on how ready I was for math at Princeton. I felt that there were holes here and there in my understanding of Calculus, so once course selection came around, I ultimately decided to start over with MAT103 in order to solidify my understanding of concepts and to sort of “test the waters” of what Princeton math was like.

Looking back, I have to say that the class definitely filled in the gaps of my understanding of Calculus I. The professor was very thorough in his teaching and provided a plethora of examples for each type of problem. The class met three times a week, and during each class we would either learn new material, practice review problems, or take quizzes. I found that the level of the quizzes/midterm/final was definitely harder than the assigned problem sets, but with a solid understanding of concepts and strategies (reinforced by tons of practice problems!), they are certainly manageable.

In case you couldn’t tell, I am learning Japanese!! I spoke when I was very young, but lost most of it growing up—this motivated me to take Japanese here.

Personally, I enjoyed this class the most. The class meets everyday—as do most beginner language classes—with sessions that cover both new material and drill practice. All three professors that teach the course are wonderful, and they engage each and every student to help them practice. In addition, the class sizes are especially small, with my section typically having around eight to ten students in total. I felt that I got a lot of attention in class due to the small number of students, and certainly got a lot of opportunities to practice speaking, writing, reading, and listening. We even had calligraphy classes and  got to complete a group project with students from 関西大学! 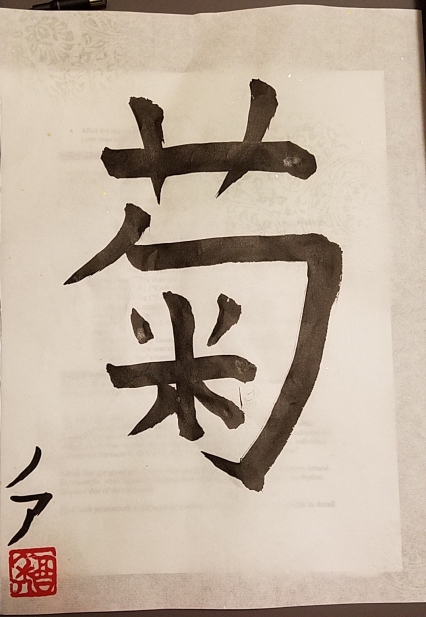 My attempt at calligraphy

COS126 Computer Science: An Interdisciplinary Approach

The class moved at quite a fast pace, but the lectures really explained the material thoroughly, so the assignments were doable (certainly frustrating at times, but doable). The organization of the course was a bit different than most in that there was no midterm or final, as it had two programming and written exams and a big final project instead. Another aspect that was a bit unique was that the class meetings (two times a week) were not lectures, but were instead meetings to provide explanations/tips for the assignments. Where the material was taught was in the video lectures provided, which was then reinforced by precept meetings. The assignments were all interesting in their own respects (varying from n-body simulations to modeling guitar strings), but the one I liked most was the Markov Model assignment, where we wrote a program that produced pseudo-random text.

My freshman seminar was actually one of the more difficult courses in terms of the complexity of the material being taught. We explored the aspects of music and instruments that to me were unknown prior to taking the course. For instance, we spent time learning about types of intervals, such as comparing the Just Major Third, Pythagorean Major Third, and Equal-tempered Major Third. Before, all I knew was the Major Third—I had no idea that those other types existed. One of the more difficult quizzes we took had us identify the different intervals to very specific degree just by ear, which I certainly struggled with.

The more fun parts, however, were the in-class labs, where we got to explore a variety of instruments and their properties. One week we examined the science behind whirly tubes, and in another we made our own overtone flutes. These labs really made the course interactive, as the material was typically taught through video lectures. One of my favorite labs was when we got to follow composer John Cage’s instructions for preparing the piano for one of his pieces. We stuck screws, bolts, and pieces of rubber between the piano strings to produce a variety of very different percussive sounds.

Aside from the courses that I took, I participated in a couple of musical groups this past semester. These groups allowed me to take breaks from studying and enjoy making music. I played in three groups: Princeton University Orchestra, Princeton Camerata, and Opus 21. I did have a lot of rehearsals, but I really did enjoy them; I got to perform a good number of pieces with different people, in different places, and for different events.

I also got to do other activities when I had the chance to do so, such as travel to New York City, visit a high school friend, and just spend time with friends on campus. A couple of friends and I got together almost every weekend to binge watch shows and movies—we even finished all three seasons of a television series with our RCA!

Overall, I thoroughly enjoyed this past semester. Even though there were very stressful times, I learned a lot and had memorable experiences with great people.

Here’s a shameless plug for Opus 21, with Emiri!!

Thanks for reading and see you next time!